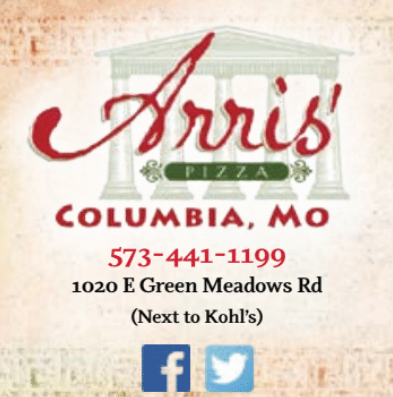 ﻿It is said that once you’ve eaten with someone of Greek heritage, you become their family. Whether you’re a relative, friend, or a stranger who encounters an opportunity to enjoy the privilege of eating with a Greek family, you become “ekoghenia,” the Greek word for family. This warm environment and welcoming spirit is what draws so many people to Arris’ Pizza. What you will find here will keep you coming back, as it has for over four decades.

In September 1961, pizza restaurants were scarce in Jefferson City. The City needed a family gathering place, and Arris Pardalos needed a welcoming home to introduce his pizza recipe. The pairing proved to be ideal, and Arris’ Pizza was soon on its way to becoming a Jefferson City landmark.

Arris was born near Mount Olympus, Greece, in 1935. With a strong desire to combine his home-made pizza recipe with a family-oriented environment, Arris found Jefferson City to be the perfect location to begin his restaurant and raise his family. Arris began in a small building at 117 West High Street, across from the Capitol and two buildings away from the movie theater. Many customers still remember the days when they would go to the movies and then eat at Arris’ pizza. The movie theater is now a parking lot, and Arris’ has also made substantial changes to its building. The restaurant now occupies three buildings, has a seating capacity of 200, and employs more than 40 people, including the Pardalos family. The menu has also expanded over the years into a versatile dining experience.

Now famous throughout the Midwest, Arris’ Pizza attracts customers who keep coming back, and who will travel far to indulge in the acclaimed pizza, salads, and sandwiches. When customers visit the restaurant, they can extend their enjoyment by taking home a “half-baked souvenir,” which is an Arris pizza that can be taken home to be eaten at a later time. These pizzas are so popular that they are mailed all over the country to Arris’ fans.

While his outstanding recipes for pizza dough, sauce, and other ingredients are key to the success of his business, Arris also attributes his prosperity to a commitment to hospitality, dedication, and excellent service. Arris thanks the people of Missouri for their continued support and loyalty.